Last Tuesday, 14 July, Cora van Nieuwenhuizen, Minister of Infrastructure and Water Management, paid a working visit to Zeeland to discuss water shortages. Ironically, it rained all day. KWR researchers Teun van Dooren and Ruud Bartholomeus were present to explain two collaborative projects relating to water storage and subirrigation. They emphasised that it is precisely during wet periods that we need to arm ourselves in the fight against drought. The use of the subsurface plays an important role here.

The Netherlands is increasingly faced with water shortages, which affect both agriculture and nature. Particularly in Zeeland, where surface water and groundwater are often brackish or salty, the problem with water shortages is clear to see. Various initiatives have been launched to tackle this issue in Zeeland. The working visit, which was organised by the Zeeland provincial authority, included a number of trial locations to highlight the urgency of the problem of water shortages. Although it had rained heavily in recent days, the problem remained.

The working visit started at the Drainstore trial at the Meulwaeter biodynamic farm in Kruiningen. Owner Alex van Hootegem outlined the problems he faced on his farm in the dry summer of 2018, when there was an extreme drought.

Meulwaeter is located on sandy creek deposits and so it is slightly higher than the surrounding area. As a result, a freshwater lens has developed here with a depth of about twenty metres. This water supply floats, as it were, on the deeper, saltier groundwater. In order to cope with dry periods better in the future, Meulwaeter, the Zeeland provincial authority, the Scheldestromen water authority, the municipality of Reimerswaal and KWR have launched a trial with the aim of using the fresh water lens to improve the farm’s freshwater supply and make it sustainable.

In early 2020, a level-controlled drainage system was installed that is linked to an underground water storage system. This combination makes it possible to capture excess rainwater as much as possible during wet periods and store it in the underground freshwater lens. When this water is needed to water crops later, it can be recovered from the freshwater lens and delivered to the crop using the level-controlled drainage system. During the working visit, Teun van Dooren explained to the Minister how the system works and described the important role of the underground freshwater lens as a temporary buffer. 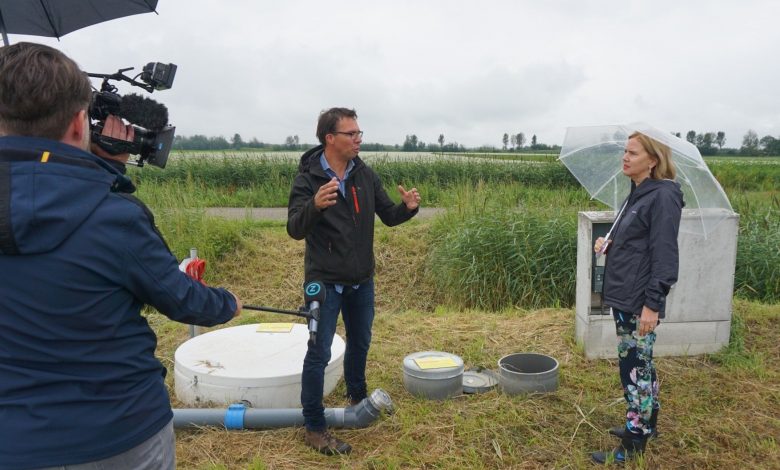 Explanation in the field about the principle of subirrigation (left: Ruud Barholomeus, right: Minister Van Nieuwenhuizen)

The working visit also included the Agricultural Innovation & Knowledge Centre Rusthoeve (Colijnsplaat), where a study is being conducted of the operation and efficiency of subirrigation using adjustable drainage at a pilot location in Zeeland. Charlotte van Sluijs, the secretary-director of Rusthoeve, and Ruud Bartholomeus told the Minister about the ins and outs of the project.

A composite adjustable drainage system was installed under one of the Rusthoeve lots in 2010. Drainage pipes have been connected to each other and they meet via collection pipes in concrete wells. From there, the water outlet goes to the ditch. That has resulted in an adjustable drainage system: a continuous system in which the drainage level and therefore the groundwater level can be actively adjusted depending on requirements.

It can be used to retain water and buffer it in the ground. However, the system can also be used to replenish groundwater actively using subirrigation. In simple terms, this means underground irrigation. The trial at Rusthoeve is being conducted by KWR and KnowH2O with financial support from the Zeeland provincial authority, the municipality of Noord-Beveland and the Scheldestromen water authority.

In addition to these two projects involving KWR, there was also a visit to Inlaag Hoedekenskerke. This is a nature reserve that was developed as a breeding location for various birds. The Dutch Society for the Preservation of Nature (Natuurmonumenten) has brought in brackish water here to limit the damage to nature caused by drought. The day ended with a visit to the Walcheren water retention facility, where various water adaptation pathways are being followed with respect to drought.

The Minister’s working visit was used to make the urgency of the drought problem clear, to explain various possible solutions and to allow the Minister to take them back to The Hague. The aim of all the projects visited is to retain as much fresh water as possible when the opportunity arises so that it can be used when there are shortages.

The approach to the implementation of the trials depends very much on the specific area because there is no generic solution for tackling water shortages. Both the local ground structure and the available water sources in the area play an important role. Conflicting interests must also be considered. For example, when water is retained underground, a farm can suffer from groundwater levels that are too high. In view of the complexity, collaboration is crucial and research parties, government bodies, farmers, nature organisations and local contractors must all read from the same page. 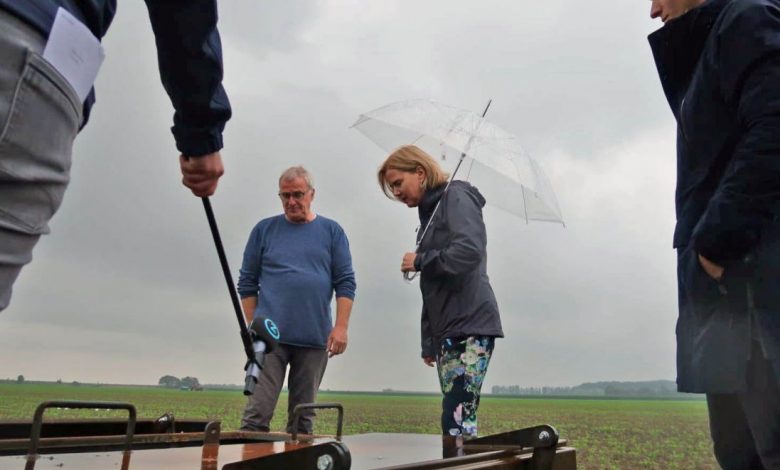